skip to main | skip to sidebar

This is a long post, but well worth a look at the stats.  It's from the website, TechSoup.  Since their mission is to desseminate this information, I've taken the liberty of re-posting it on my blog.  For other interesting stuff, you may want to visit http://www.techsoup.org/ which is a non-profit that helps non-profits.  Your local library may benefit from knowing about Tech Soup if they don't already.  But....I digress. 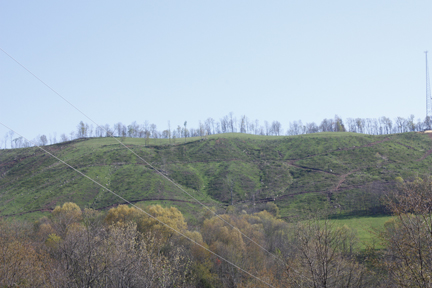 Our trees in the foreground.  The neighbor's landscape on the hillside.
The once-pristine hillside across the road from us out here JOTOLR, was--three years ago--a beautiful hardwood forest, covered with all manner of native species of Appalachian hardwood trees.  Today, it is a dry, scarred and ugly ruin.  It is trampled daily by bovine hooves, nipping already scarce greenery to the nub; machinery goudges tracks randomly over the tortured ground which never has an opportunity to heal.

The logging trails bleed out the moisture that once collected beneath living roots.  How I mourn the deaths of those once-proud trees and the no-longer-beautiful landscape.  For two years we arose daily to the sound of roaring chainsaws and the "whumps" of falling giants.  Today, it is silent.  There are no more trees to cut.  There is a scant covering of spindly grass every spring about now, but it quickly fades as summer's heat withers the remaining sprigs, and the color changes rapidly from green to brown,  It's a graveyard of unearthed boulders and stumps.

And you know where the trees went? To make pulp for paper. All of it.

I find it amazing that long ago, we entered the "paperless" age.    Predictions of "saving trees" thanks to sophisticated technology were rife.  Have these predictions materialized?   Have a look at what TechSoup calls a set  of "shocking" statistics:


This roster of shocking statistics about wasting paper was originally part of TechSoup's GreenTech Initiative's Reduce Your Paper Use challenge.
These statistics, we hope. convey why it is so important to conserve paper in your organization's office.
Office Paper Use


•In this decade, it is projected that Americans will throw away over 4 and a half million tons of office paper and nearly 10 million tons of newspaper. Almost all of this material could be recycled. #


•210 billion sheets of paper are consumed by faxing in U.S. companies every year. **


•95 percent of this paper will eventually be thrown away unrecycled. **


•4 trees per year are cut down to feed the fax requirements of an average U.S. company. **


•17 million trees per year are cut down to supply fax paper for the U.S. as a whole **


•Every year enough paper is thrown away in the U.S. to make a 12 foot wall from New York to California. #


•If every household in the U.S. reused a paper grocery bag for one shopping trip, about 60,000 trees would be saved. #


•Recycling 1 ton of paper saves 17 trees (35 feet tall), 2 barrels of oil (enough fuel to run the average car for 1,260 miles or from Dallas to Los Angeles), 4,100 kilowatts of energy (enough power for the average home for 6 months), 3.2 cubic yards of landfill space (one family size pick-up truck) and 60 pounds of air pollution. #


•One tree can filter up to 60 pounds of pollutants from the air each year. #


•Rainforests once covered 14% of the earth's land surface; now they cover a mere 6% and experts estimate that the last remaining rainforests could be consumed in less than 40 years. &&


•Recycling a four-foot stack of newspapers saves the equivalent of one 40-foot fir tree. #


•Everyday Americans buy 62 million newspapers and throw out 44 million. That’s the equivalent of dumping 500,000 trees into a landfill every week. #


•If everyone in the U.S. recycled just 1/10 of their newsprint, we would save the estimated equivalent of about 25 million trees a year. #

Elora
Welcome to the country! Drive gently. Slow down. If someone's rudely chewing your bumper, find a wide spot and pull off that one-lane road you've been on for far too many miles. Leave the hurry to others. Invite them to go around. It's all about the journey, not the destination. It's time to explore the things you've always loved and renew your joy in just being alive. That's what I'm doing. My joy is a small farm, deep in the Appalachians. Its bounty provides self-sufficiency to two "seniors." Together, my husband, MM, and I, milk a cow, and grow, tend, and preserve a big garden annually. Fruit and nut trees and berries add to the cornucopia; toss in a few egg layers, three pigs, seven cows, and four canine helpers. It adds up to a joyful, sustainable life! We eat locally--as in right here on the farm!--healthfully and seasonally. We gather firewood in the summer to burn in the winter. Each day is a beautiful new adventure. My name is Elora and I'm so glad you stopped by for a visit! I hope you'll enjoy my photos and thoughts as I take you along with me on my daily journey about the farm, just off the one-lane road.